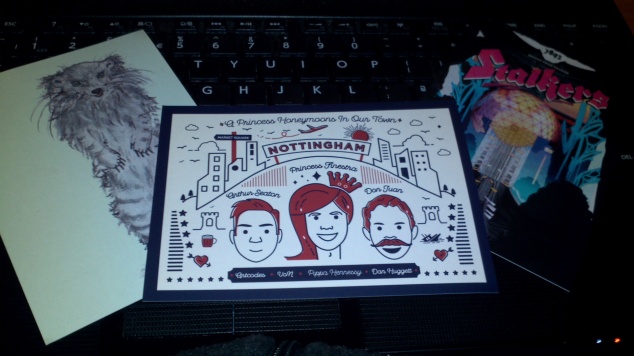 Excuse my terrible photo. L-R Postcard versions of Who Am I?, A Princess Honeymoons In Our Town and Stalkers.

Storicodes was not your usual art exhibition. These works of art required you to get involved, whether mediating conversations between Arthur Seaton, Don Juan and Princess Finestra; helping a little fluffy creature discover his true identity; or using an inter-dimensional communication device to thwart an insidious enemy; standing and admiring the pretty pictures was only a tiny part of it.

I have to admit, I went into it expecting QR Codes with an inflated sense of their own importance, but Storicodes are so much more than that. The app can recognise images in sequence, or require the user to scan a particular sequence in order to unlock the next part of the text. The potential applications for this are varied and exciting.

Ideas that arose in the post-viewing discussion included a treasure hunt around a shopping centre, Pokemon-style collecting missions around participating websites, educational murals around schools and easily updateable (and translatable) texts for museum displays. There was also discussion of the possibility of the codes altering their output according to light, weather and the direction the user moves their phone. Seriously, this could be as ubiquitous as QR codes, but more interesting. If you’re a terrible map reader like me, perhaps you find the Storicode symbol on a map in an unfamiliar city. Scan your position, and you’ll get a picture of where you are to help you orient yourself. Scan your destination and it’ll give you directions and a picture of landmarks along the way. Scan the next one you find and it’ll remember your destination and tell you if you’re going the right way, or have gone off track. (I’m not saying I spent ages wandering from map to map in Birmingham a few months ago, but that may have happened.) Or what about board games? It’s really cool playing something like Trivial Pursuit or Pictionary, but after a few playthroughs, the same cards start to crop up. Imagine instead you just get one card of each type with a cool graphic on it, and when you draw it in the course of play, you scan it with the app and it draws on a corresponding question from its database. Want an expansion pack? Pay through the app and have more questions added to your virtual deck.

And then there’s the possibilities for writers. Promotional postcards could contain extracts from novels embedded in their images, bookmarks could allow your readers to get to know your characters better as they work out which of the beautiful decorational items relate to the fictional folks’ lives and why. Your cover could contain a secret preview of the next book in the series only available to those willing to spend the time figuring out your carefully-dropped Twitter hints (or randomly scanning every inch).

I look forward to seeing Storicodes develop and playing around with more of their story-art in the future!

2 thoughts on “The Writing’s On The Wall”